Ken Follett is a well known writer. There is some famous trilogy of his which I am yet to read. He had recently come to a Mumbai bookstore too-I think it was Landmark but I can’t be sure. Anyway, so I heard a lot about him then. I vaguely knew his name too but somehow I associated him with only fantasy related novels which is a genre that after a good dose of Harry Potter, Ursula Le Guin, Narnia series, Eragon trilogy, Hobbit I do not want to read much. But when I read some interviews of his in the newspaper and then some blogs, I realised that my association of Ken Follett and fantasy novels was misguided. He seemed to write mystery novels and historical ones. This obviously got me interested! 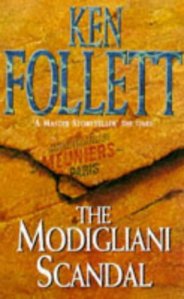 So I ended up reading ‘Modigliani Scandal‘ which I found in my library.  The book was really well written and I thoroughly enjoyed it and it was appropriate for my thriller/mystery taste of books.

The story is sort of complex with a smattering of characters that have interestingly just one purpose. The novel begins with Dee Sleign, an art historian, looking for a thesis and decides to do one on how drugs induced painters create different paintings than their usual ones. This line of thought somehow leads to a person her boyfriend knows who in turn gives her some information about some Modigliani paintings that are lost somewhere in this world. This gets her brains working and she decides to hunt this lost painting to start work on her thesis. She then feels an urge to tell someone about this. So she writes a postcard to her uncle, Charles Lampeth, a gallery owner. He obviously would love to get his hands on this painting as it would be a valuable prize to display in his gallery. He sends a detective to search for her.

Meanwhile, Dee sets out on a wild goose chase in search of that elusive painting. By coincidence or a pure quirk of fate, several other people get involved in this same mission like Peter Usher, an artist who wants to take revenge on Lampeth, his former employer; Julian Black, who wants to get this painting to impress his father-in-law so that he will invest in his art gallery and so many more people. Who will eventually get the Modigliani?
To find out, read the book yourselves.

‘Modigliani Scandal‘ is a good read, a treat for those who have a penchant for thrillers.

The book’s pace is always a good one. Follett introduces many characters initially and establishes their situation and their background in the plot. But this surprisingly does not drag the novel’s pace. It adds to its complexity and makes the plot thicken and bubble with an impending thrilling search for a lost treasure. A sense of foreboding about a mystery brewing is clearly established when after receiving Dee’s letter, Charles Lampeth hires a detective. The reader will want to turn the pages to know more and get to the end of this mysterious search.There are several loose ends that are also manifested with the introduction of so many myriad characters which Follett ties up brilliantly in the end. It is amazing to know that so many characters are connected in some way to each other and have one single aim that will fulfill their different goals.  The end brings all these connections a full circle. When the book is nearing its end, if the reader is smart enough, then she/he can guess who gets the painting and the ingenuity behind a well planned and money making scheme.

One small point I loved about this novel is its distinct sense of an old world charm, of history in the first few chapters which merges with the modern art world-its pros and cons.

‘Modigliani Scandal‘ is divided into four parts and the title of each one is related to painting and gives a glimpse of the basic core of that particular part. I found this aspect quite creative.

There’s one small negative point. Follett has put in several stereotypes about many natives of countries. This is uncalled for and it is sadly reminiscent of several other thriller novels that are liberally sprinkled with such stereotypes-be it about Italians, French, Oriental or British.

P.S. There may be some errors in the plot summary because I read the book long ago and my memory has faltered a bit. For example, I am not sure if Charles Lampeth is Dee’s uncle or father or some other relative. I am 75% sure he is the former.