No other person in Indian English literature is as closely associated and identified with the Partition as Sadat Hasan Manto. He has to his credits a novel, radio plays, essays, film scripts but he is synonymous with the Partition short stories he penned. 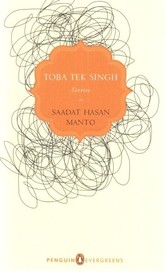 There is a good variety of stories in this collection and are not confined only to the Partition. They deal with many subjects-Partition being one of them, human nature being another subject etc. His most famous stories like Toba Tek Singh, Colder Then Ice, The Dog Of Titwal etc., are included in this collection. Others may not be well known but are equally well written and give a startling glimpse into tender human moments or into the twisted human mind. The great advantage of short stories is that it can capture the boldest, the most essential and deliver it with a bang in a few words which immediately hits the reader. This advantage Manto exploited thoroughly to make his point to the readers. Toba Tek Singh is a brilliant example of how Manto comments on the issues of nationality and the futility of constructing them arbitrarily. Odour captures Randhir’s wistful reminiscences of a girl he met on a rainy day and how the peculiar odour she exuded completely enchanted him and how he searches for that in his bride. The Gift borders on the comic as it narrates the story of Shankar and how he cleverly dupes two prostitutes by giving them gifts that belonged to each other. Bitter Harvest is a poignant story of the manner in which hatred and violence can consume the best of friends leaving only animals raging with vengeance. A Woman For All Seasons is about the vagaries of fame and fate from the point of view of an actress. There are in all fifteen stories that will surely give you a fleeting glimpse of a range of societal mores and characters. These stories depict how Manto wrote about all subjects, all sorts of people-whether the hight, middle, low class etc. There shines an honesty and an ache for humanity in his stories. His approach to writing his not selective as he wrote about everything under the sun be it taboo subjects like sex, prostitution or sensitive topics like the Partition.

This Penguin Evergreen is sure to delight everyone. What may not be delightful is the simplistic translation by Khalid Hasan. It is too banal and often fails to capture the mood and feel of the story with the same bitterness that Manto suffuses them with. The only stories that felt like a good translation were Odour and The Dog Of Titwal. Others had something or the other lacking in them. They didn’t make you sit up and feel shocked. They somehow lulled you into numbness which is not a reaction to be elicited when reading a Manto story. The latter always makes you think and imposes on you a new idea, a new viewpoint that you are compelled to ponder over. This translation fails to do that. The reader will only be able to take a momentary pleasure from them and not a sustained, lingering and fresh perspective. I don’t have any other recommendations to read other translations as I have forgotten the translators’ names of whatever few stories I have read in different collections.  Recently in 2012 a collection, ‘Manto: Selected Short Stories’ was released and it is translated by Aatish Taseer. How good it is is yet to be ascertained. But it is worth giving it a shot.

Despite the translation flaws in ‘Toba Tek Singh: Stories by Sadat Hasan Manto’, it is worth picking it up (and not just because it’s cheap) as it will acquaint any reader with some of Manto’s works and his style of writing. Hopefully, this book will generate more interest in Manto’s writings.

One thought on “Manto’s stories”