Linda Shaji-Pauline, a fellow feminist and a rice lover, who had an affinity for post-colonial literature but now realises that there is much more to read as well. When she’s not at work, her motto is, “will walk for food.” You can often find her walking around all over the city in search of that new restaurant. She is still undecided if she loves music or books more but agrees that together they make the best combination. Together they make her life in finance very tolerable.

That is how I encouraged myself to pick up a Kenyan (notice I do not refer to this as an African) classic, Weep Not, Child.

Why? Because I thought that this work would be a cliché as it was one of first works of post colonial literature. 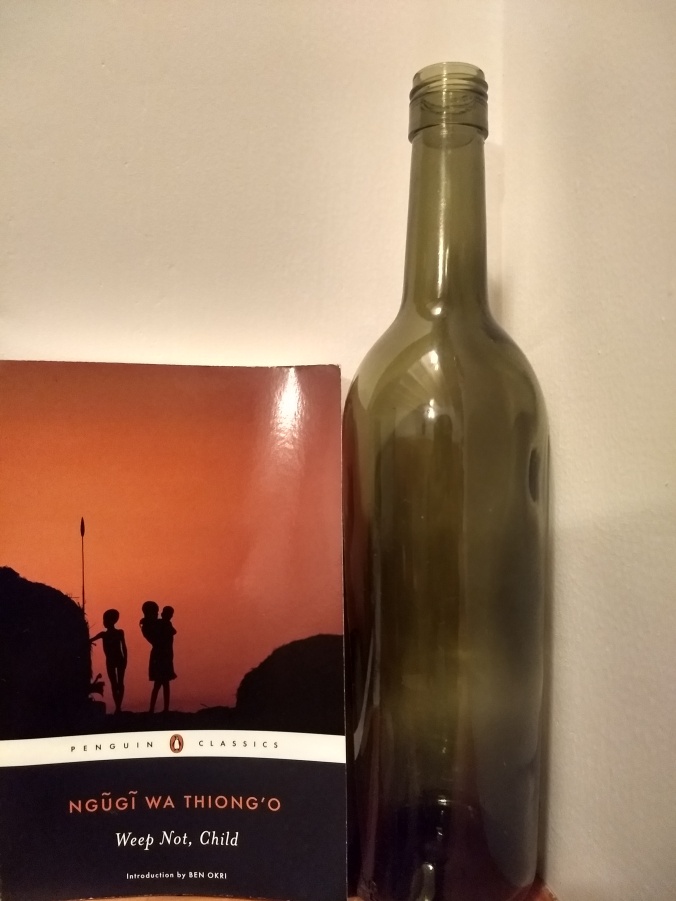 Also never have been a fan of “classics”. But yes, the story is rather simple, and sticks to the use of long, oft repeated themes of post colonial literature like redemption of one’s oppressed life through western education / Christian God, that colonialism was never any good at assimilating with the local population, but were merely diving cultures, etc. These themes have seeped into our imagination since pioneers like Ngũgĩ wa Thiong’o’ thought it was important to write about them.

The story of Weep Not, Child revolves around Ngoronge and his quest to attain education, which he thinks is the only solution for a better life. The book starts off with the reader introduced to colonial structures that have carefully been built upon old heathen cultures.
We meet Ngoronge’s father Ngotho, who continues to work as labourer on his former land for a white man (Mr. Highlands) because of his belief in the fulfillment of a prophecy. In a culture where Land is the ultimate source of power and wealth, Ngotho believes that it is his duty towards his land to cultivate and nurture it although the white man has now taken over. Someday when the prophecy is fulfilled, the land will once again be theirs.
Ngotho is the pillar of the family structure where he lives with his two wives, Nyokabi and Njeri and five sons, including Ngoronge, Kori, Mwangi Kamau and Boro. While Kamau is sent as an apprentice to a carpenter, seeing his thirst for education, Ngoronge is the first person in his family to be sent to a school. His other brother, Boro, is troubled by his experiences as a World War II veteran, including witnessing the death of his elder brother, Mwangi.

It starts off with a bright promise (an idealistic one) that positive change will happen through education, which Ngoronge was to begin. Ngoronge is found to be a bright student and gradually graduates to high school. The coloniser has made the colonised follow his Christianity and Ngoronge is a devout Christian. He is in school along with Mwihaki, the daughter of Ngotho’s arch rival – Jacobo. While Ngoronge starts high school, she then starts “teacher training” since she was not so bright as Ngoronge. By this time the Mau Mau have started their political dissent and we find both Ngotho and Boro drawn to it. In the end because of the political turmoil in his nation Ngoronge is forced to leave education, to say the least. He also loses key member of his family and the family structure is altered forever.

Weep Not, Child took me to my lazy days as a student when I idealised the socialist theories and governed my life by following strict principles. No sooner did I join my work organisation, I abandoned these ideals to fit into the construct of the organisation. I associated well with Ngoronge towards the end of the book, with him leaving God, education and his other principles, feeling lost with the practical and harsh realities of life. It is a constant reminder to the world that religion and ideology should not always be the factors determining one’s life decisions.

I have only one complaint towards this book, which I feel is a severe one, even though it can be said that the book is a product of its time – there are no female voices that are explored. Hence to me, it would seem that the writer has not captured his entire audience. But then this is only his first work.

This book has also encouraged me to find books written by the Indian diaspora there, considering that it portrays Indian origin persons as almost “weak” with them trying to act like “neo colonisers while being colonised themselves”. This is not nationalism flaring up, but it is a genuine need to understand what each community understands of each other. But that is for another project.

For now, I would encourage everyone who is yet to read any bit of Kenyan literature to start with Weep Not, Child while keeping Wikipedia handy to understand the history behind what is being said. This is a great lesson in history and in Kenyan literature in English.

Ben Okri in his introduction calls Weep Not, Child an essential read, and I am paraphrasing here, it is something that should be on your to-read list alongside classics like Romeo and Juliet. I must admit that I did not get the Romeo and Juliet part, partly because I always thought that the love Ngoronge had for Mwihaki, was very platonic and something more seemed too forced to me or too much of an analysis or interpretation. Rather than a romantic novel, I see it as a novel about loss.

But I agree with Okri on one thing, it should be on your bookshelf along with other books of the world.

So what are you waiting for?

Read more about Thiong’o’s critical essay, Decolonising the Mind, here.
Anyone else has read Weep Not, Child? What did you think about it? Do you think it can be compared to Romeo and Juliet? Comment below!
Have you read any other post colonial work? Share your thoughts below!

One thought on “Guest Post: Weep Not, Child by  Ngũgĩ wa Thiong’o’”