The opening of Mo Yan’s Red Sorghum – a child of fifteen setting out to join his foster father’s mission to ambush the Japanese – sets the tone for the rest of the novel: not only violent but intensely detailed violence. 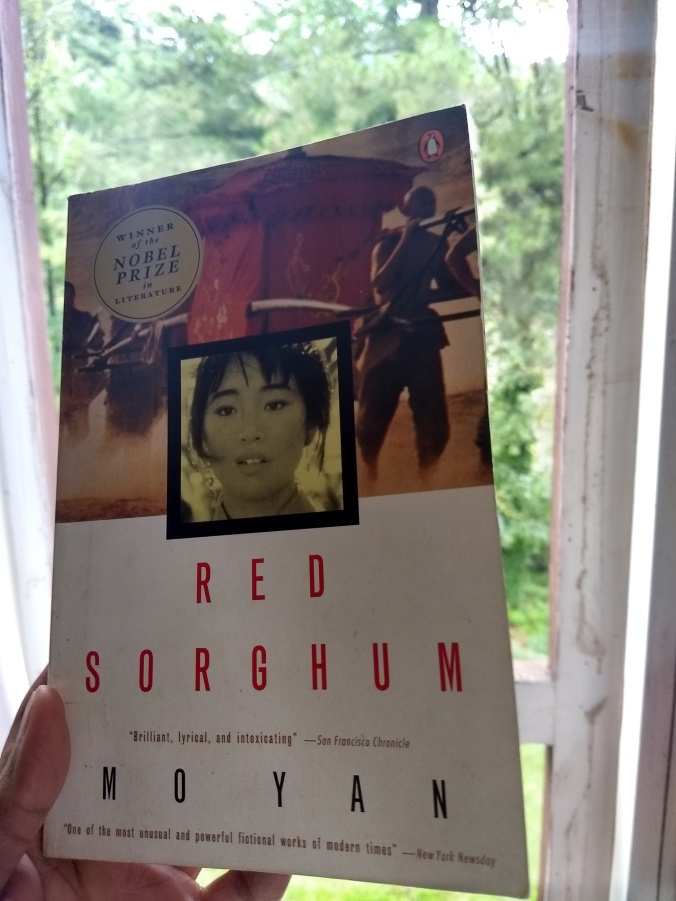 The self conscious narrator of Red Sorghum is actually the third generation of that family whose history is warped and woven both with the Northeast Gaomi Township in the Shandong province of China and its main crop, the red sorghum.

The suffusion of the red sorghum plant in the story is overpowering. It is everywhere-both physically as well as metaphorically. Mo Yan uses the symbol of the red sorghum as a means to describe the actions, emotions, life stages of the characters and anything and everything under the sun. Just like in Camus’ The Plague, the plague itself was a metaphor of the human condition, similarly in Red Sorghum, the crop itself is an extension of the characters and their lives: steady and ever present.

The narrative technique used in the novel is non-linear since the story traces three generations through a curious merging of the past and the present; or through flashbacks within flashbacks; or numerous foreshadowings.

Needless to say, there is a lot of back and forth happening in the story. One minute you are with the narrator’s father battling Japanese soldiers on the main bridge of the Township but the next moment you are sitting side by side the narrator’s grandmother in her bridal sedan!

Thus, summarising the novel seems quite superfluous and I shall deem it fit to avoid that tedious task.

What the narrator does focus on as mentioned before is to start with how his father and grandfather, Yu Zhan’ao, struggled as bandits to fight the Japanese soldiers who were taking over their village, weaving its way into the fortunes and misfortunes of the family be it how his grandmother met his grandfather or how she became the owner of a sorghum wine distillery, or how his father himself grew up with his grandma to the well known affairs that his grandfather had.

What stays constant are three things: the bitter violence and its sheer detail that Mo Yan writes profusely about, the omniscient red sorghum along with the reflective and conscious narrator who knows that he is sitting down and writing this epic prose to record his family’s history for all to know about. The narrator, the grandson of the bandit, Commander Yu, deftly and expertly warns the readers of what will happen next or what to expect in the story or takes us back in time to a point where living in the Township was about farming and peace but then immediately juxtaposes it with the violence of the present day.

Surprisingly though that non linearity does not make the story jarring but rather adds to it a layering not often seen in family sagas. What makes it jarring is the elaborateness of the violence at every turn. Blood, gore, torture, people blowing up or knifing each other is portrayed with great depth and vividness which does show the writer’s skill yet makes the story too unpalatable as well and does interrupt the flow often.

While the whole novel is tightly wrapped with no action seeming unnecessary or unconnected with the main characters, the ending in the last part of the novel is not as taut and seems almost pointless with an introduction of new characters who are not as fleshed out as the rest and the ending seems not in sync with the rest of the story.

However, in the very last chapter, the narrator takes center stage and shows us the Northeast Gaomi Township as it stands in the present day and about his attachment as well as a simultaneous detachment with the place. And guess what-red sorghum still abounds but of a different kind! What kind might one ask?
You may ask but I still won’t answer as you need to read and to figure that out by yourself.

So if you do not mind war stories that are a bit on the gory side, steeped in history and entwined with family stories and want to know a bit about Chinese history then, Red Sorghum is a good fit for you!