Translated from Assamese by Udayon Misra, Swarnlata is a historical fiction about three girls growing up in Nagaon in Assam during the 1800s’ in the Pre-Independence era. It is written by Tilottoma Misra.

The eponymous character is the daughter of Nagaon’s Assistant Commissioner, Gunabhiram Barua, who has accepted the Brahmo faith and married a widow, Bishnupriya, which at that time was a revolutionary and scandalous step to take. 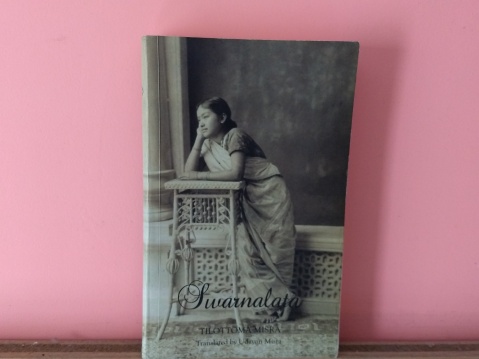 Lakhi is widowed at a very tender age, even before her marriage takes place. With Gunabhiram and her father’s support, she decides to continue with her education, which she had started with Swarnalata and her private tutor.

Tora’s mother, Golapi, converted to Christianity when the Baptist Missionary, Miles Bronson, provided her with a job at the mission school at Nagaon as a chowkidarni after her husband’s death. She saw faith in this religion and Tora followed her mother’s footsteps by studying in that school and eventually becoming a teacher there as well. However, Tora does suffer from self doubt about the faith’s complicity with the British rule and its ever increasing cruelty. This facet of Tora’s personality brings out a significant idea of how and why people converted and even if natives did become Christians, they were still considered savage subjects.

Swarnlata depicts their growth, the different paths each girl embarks upon, their eventual marriages and how each is affected by the damaging and regressive attitudes toward women, religion and caste.

The upheavals of the time and the social revolutionary steps being taken then have a direct bearing on the three girls particularly, Swarnlata and Lakhi. Pertinent issues of women’s education, widow remarriage and changing the girl’s marriageable age and stopping child marriage were discussed and debated upon ferociously by open minded thinkers and intellectuals. A few of them, such as Gunabhiram, applied it to their own lives as well. To some extent, even Lakhi’s father did the same, though he always professed that he is not a revolutionary but a supporter. Yet he did support Lakhi’s education and later her teaching job, defying his own wife and other family members.

All in all, Swarnlata makes for insightful reading, giving a peek into both how Assam was affected by the various social reform ideas, which is rare since our Indian history textbooks mostly focus on the famous Bengal Renaissance, and what the women thought about these reforms and the effects on them. Although it makes for a beautiful historical bildungsroman, the tone of the novel is less poetic and more factual and at times often read as a history textbook. The plot when it came to the three girl protagonists’ marriage was also predictable as if the author wanted to imply that their struggles and conflicts can only be ended through a marriage.

Thankfully though, the novel ends not on some ‘happily-ever-after’ note but on a very hopeful one of the dawn of the new century, which Swarnlata hopes will bring in more change and optimism to women’s lives.