Welcome to the fourth poem of the month!

This month we celebrate the birth anniversary of Kashmiri poet, Agha Shahid Ali. He was born on 4th February in 1949. He would have turned 71 this year.

In his poems, he gives voice to his sense of self exile and homelessness. Ali immigrated to the US for this studies and continued to stay there. His poetry also depicts his nostalgic view of his homeland, Kashmir. Later on his poems, particularly the one in his collection, The Country Without a Post Office, dealt with the growth of terrorism in the state and its effects on the communities of the region.

I picked the poem below because this was the first poem I had read written by him. I still vividly remember one of my English professors reciting the first stanza in class and how I was struck by the simplicity of the metaphor.

Kashmir shrinks into my mailbox,
my home a neat four by six inches.

I always loved neatness. Now I hold
the half-inch Himalayas in my hand.

This is home. And this the closest
I’ll ever be to home. When I return,
the colors won’t be so brilliant,
the Jhelum’s waters so clean,
so ultramarine. My love
so overexposed.

And my memory will be a little
out of focus, in it
a giant negative, black
and white, still undeveloped.

The opening couplet so succinctly and beautifully conveys different facets of nostalgia and memory. It portrays the idealistic image of Kashmir that a postcard would capture. The poem conveys Ali’s own distance from his homeland and how Kashmir’s depiction in a postcard mirrors his own nostalgic and rosy view of the valley.

Nostalgia is a cruel thing in a way. It forces you to ache for something that is not there anymore. A postcard captures exactly that: a place frozen in time, neatly ensconced within 4 x 6 inches. 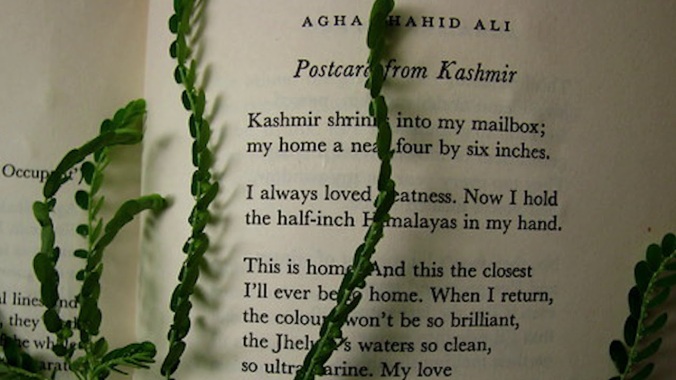 Do you have a favourite poem you absolutely love? Share them with The Book Cafe as part of the Poem of the Month! Click here to know more.

Welcome to the third poem of the month.

1st January 2020 marks the beginning of  a brand new decade and also heralds the coming of so much hope.

We all ring in the new year with promises and resolutions, leaving behind our losses and the things we didn’t do, promising that we will do better!

So this month, I chose a poem that expresses that hope and that promise so well.

So much of any year is flammable,
lists of vegetables, partial poems.
Orange swirling flame of days,
so little is a stone.

Where there was something and suddenly isn’t,
an absence shouts, celebrates, leaves a space.
I begin again with the smallest numbers.

Quick dance, shuffle of losses and leaves,
only the things I didn’t do
crackle after the blazing dies.

The metaphor of burning suffuses the poem. Though ironically it is a literal burning that the persona is engaging in: burning the letters, notes, incomplete poems etc. The action is very tangible and one that immediately connects with leaving behind everything unfortunate and old and stepping into the new, starting afresh.

The title also references the tradition of burning the old man during new year. Burning effigies to signify the burning of the past and also of evil is a common motif across cultures, one that resonates with the people’s need to dissolve their bad deeds and usher in goodness in their lives. This poem, however, depicts a burning of a personal nature rather than a symbolic one. No effigy is being burnt here but actual personal things to bid goodbye to the losses.

What do you think about the poem? Please share in the comments below!

Do you have a favourite poem you absolutely love? Share them with The Book Cafe as part of the Poem of the Month! Click here to know more.

Welcome to the second Poem of the Month!

This month, December 2019, we will look at Carol Ann Duffy!

Carol Ann Duffy’s birthday is on 23rd December! She was born in Glasgow, Scotland in 1955.

To celebrate her birthday, the second poem of the month will feature one of her poems.

Before that let us get to know her a little bit more, shall we?

Carol Ann Duffy is an acclaimed poet and playwright. She also writes picture books for children. She was the first female Poet Laureate of Great Britain. She held the position from 2009 to 2019! She has written several unique poetry collections such as Standing Female Nudes (1985), The World’s Wife (1999) and The Bees (2011). Check out my review of The Bees. 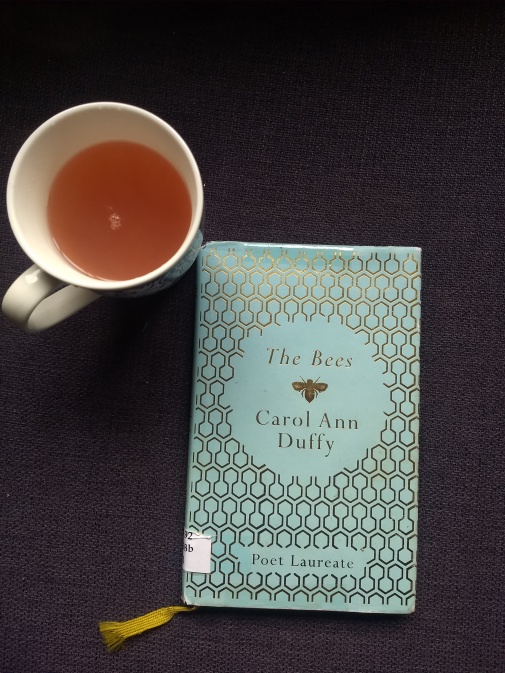 So now coming to the poem itself! My favourite collection by Duffy is The World’s Wife. It is a collection of poems that give voice to the female characters from historical, literary or mythical fields that have been overshadowed by their male counterparts. So the poems narrate the point of views of varying Western female figures from Mrs. Freud to Mrs. Faust, from Mrs Sisyphus to Demeter, from Mrs. Aesop to Little Red Hiding Hood and many many more. The poems, therefore, form part of a feminist revisionist mythology that is used here to reclaim female voices and experiences.

While it is extremely difficult to choose one from this collection because all of the them are so witty and so satirical! So here is one short, succinct one that will make you laugh!

7 April 1852
Went to the Zoo.
I said to Him—
Something about that Chimpanzee over there reminds me of you.

This poem is such a sing song one with simple rhymes of two, zoo and you.
The opening date is not significant but it is important to know that Darwin’s evolution theories were published in 1859. Perhaps, then, the poem is then trying to hint that it was Mrs. Darwin’s comparison that actually was behind Mr. Darwin’s ground breaking theories. In just four lines, Duffy has remarked upon the females behind scientific discoveries that are often ignored simply because of their gender!

END_OF_DOCUMENT_TOKEN_TO_BE_REPLACED

Welcome to the first Poem of the Month!

This month, November 2019,  we look at Anna Akhmatova.

Russian literature is known for being dour and gloomy. However, like literature from many countries, it is known more by its male writers than female writers.

I think my interest in learning more about female writers from Russia was piqued when a friend of mine randomly asked about it and I realised I knew about none!

Thus, coming across Anna Akhmatova’s work by chance in a bookstore helped me to dispel my ignorance when it came to female writers from Russia.

When at night I wait for her to come,
Life, it seems, hangs by a single strand.
What are glory, youth, freedom, in comparison
With the dear welcome gust, a flute in hand?

She enters now. Pushing her veil aside,
She stares through me with her attentiveness.
I question her: ‘And were you Dante’s guide,
Dictating the Inferno?’ She answers: ‘Yes.’

This poem is from her work, Reed. Though it is extremely difficult to pick only one single poem from such a gifted writer, I chose Muse, because the poem conveys an intimate conversation between the persona of the poem and a Muse.

END_OF_DOCUMENT_TOKEN_TO_BE_REPLACED

It’s been a while since The Book Cafe presented a new series! It felt empty. So to fill that strange void, we present a new series on poems!

Once a month, on the 15th, The Book Cafe will present one specific poem, for you, my dear readers, to soak in and enjoy!

This space will be devoted to love for poetry. It will be a space to share our favourite poems and discuss why it is a favourite!

Why poems though? In a blog meant for book reviews? Because poetry reaches out to the soul in such succinct styles and manners that are bound to take your breath away!

This is also to allow for greater appreciation of poems when very few people are attracted to the idea of reading!

If you are a poetry connoisseur like me, come blog about it here!
Share your favourite poems with me at akisabookworm@gmail.com

Stay tuned on the 15th of each month for your monthly poetry updates!